The management of the Nigerian Defense Academy ( NDA) Have released her Final Admission List for the 2018/2019 70th Regular course . All candidates who participated in the screening and interview exercise are hereby advised to check if there names are on the list. The names of admitted candidates are contained on the attached pdf document. See important details below; 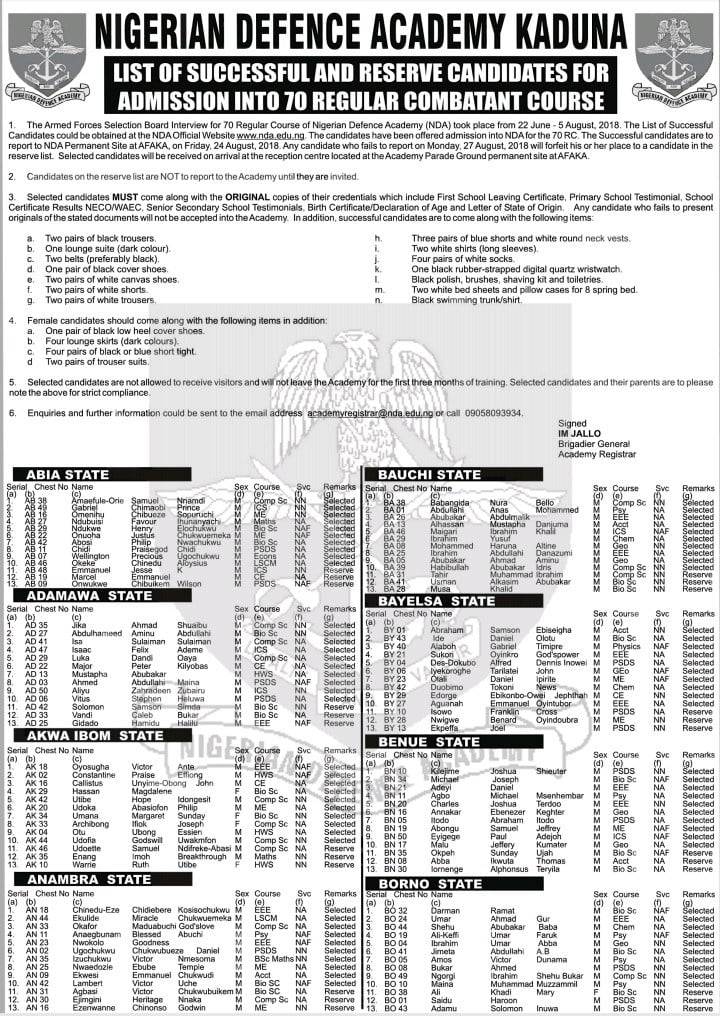 Meanwhile, successful candidates have been advised to report to the NDA permanent site at AFRAKA on Friday 24th August 2018.

It was warned that candidates, who failed to report before Monday, 27th August, will forfeit admission to candidates on the reserve list.

The candidates whose names appear below were successful at the Armed Forces Selection Board Interview held from 22 June – 5 August, 2018. The candidates have been offered admission into the Nigerian Defence Academy (NDA) for the 70th Regular Course.

They are to report for training at the NDA Permanent Site at AFAKA), Kaduna on Friday 24th August, 2018. Any candidate who fails to report on Monday 27th August, 2018 will forfeit his or her place to a candidate on the reserve list.

Selected candidates will be received on arrival at the Reception Centre located at the Academy Parade Ground (Permanent Site). Candidates on the reserve list are NOT to report to the Academy until they are invited.

Selected candidates MUST come along with the ORIGINAL copies of their credentials which include;

Any candidate who fails to present originals of the stated documents will not be accepted into the Academy.

In addition, successful candidates are to come along with the following items:

Enquiries and Further information could be sent to the email address academyregistrar@nda.edu.ng or call 09058093934.